An audio clip of a conversation between Anwar Ibrahim and Zahid Hamidi has given Malaysians a ringside seat into the shady backroom dealing between two of the nation’s prominent politicians. Genuine or not, the political interests of the two men have increasingly converged.

Ears, phones, and WhatsApp accounts are a-buzzing in Malaysia’s political circles, as players and insiders indulge in a vicarious listen on a phone conversation that two of the country’s leading politicians had. The conversation, which is of mysterious provenance, was purportedly between Anwar Ibrahim, the leader of the Pakatan Harapan (PH) coalition, and Zahid Hamidi, the president of Malaysia’s erstwhile dominant party, the United Malays National Organisation (UMNO).

The two men are, or should be, sworn opponents, as PH is in the opposition and UMNO is currently in government. Yet, the phone conversation between the two was punctuated by a chorus of chuckles and camaraderie. During the call, Anwar praised Zahid for his speech at the recently-held UMNO Annual General Meeting, where the latter rejected any form of collaboration with major parties, stating “no Bersatu, no Anwar, and no DAP”. In turn, the UMNO supremo reassured Anwar, saying “don’t worry, that is only tactical, OK”, before going on to praise the opposition leader as his teacher.

Despite belonging to different parties, the two men go back a long way. Of special significance is the fact that Zahid was the leader of UMNO Youth and a close associate of Anwar, who was Deputy Prime Minister and UMNO Deputy President in the late 1990s. Following Anwar’s fallout with then-Prime Minister Mahathir Mohamad in 1998, Zahid criticised the sitting administration for pervasive cronyism and rent-seeking. This resulted in counter-attacks against the youth leader and a brief period in the political wilderness, after which Zahid was re-admitted to the party.

Both Anwar and Zahid have since denied that they were involved in the conversations, claiming that the audio was faked by their opponents. Regardless of its veracity, the political interests of Zahid and Anwar have increasingly converged in the past year. At present, PH does not have the numbers in parliament to topple Prime Minister Muhyiddin Yassin. From Anwar’s perspective, further discussions with Mahathir Mohamad are a non-starter, as the opposition veteran fears being denied the prime ministership by the senior politician for a third time. This, then, leads to a quest for new and unexpected bedfellows. UMNO, with its 38 parliamentary seats would – in theory – help PH to cross the finish line.

Regardless of whether the telephone conversation actually transpired, it is possible that the two veteran politicians, with their shaky political currencies, may soon only have the other to talk to.

As for Zahid, he has his own problems – and political calculations. He is currently facing a raft of charges for corruption, money laundering, and criminal breach of trust. The prosecution for the first case has rested, and it is widely anticipated that he will need to enter a defence. While a substantive conviction would not necessarily result in immediate incarceration, it would mean the end of Zahid’s party presidency and parliamentary seat – as well as the influence that these positions provide. Thus, the party leader has an interest in proceeding to elections post-haste, and then negotiating a dominant role for UMNO in the next governing coalition.

The reality is that an alliance of some sort between UMNO and PKR is not out of the question. It is very likely that the next general election will not yield a clear winner, particularly if there are three-cornered contests between Muhyiddin’s Perikatan Nasional, PH, and UMNO and its few remaining allies. Thus, the eventual ruling coalition may consist of previously sworn enemies. However, it is one thing to broker a pact after the elections, and quite another to collude clandestinely while negotiations have been openly rejected.

The reactions to the recording were rapid and revealing. UMNO leaders such as Khairy Jamaluddin and Annuar Musa called for Zahid to step down should the audio file prove to be genuine. And, Hadi Awang, the President of Party Islam Se-Malaysia (PAS), stated that his party would not work with UMNO if it seeks to ally with Anwar and PKR.

UMNO is slated to hold party elections by mid-year, and the calls for the internal polls to proceed as planned have increased in number and intensity. Beyond Khairy as a possible presidential contender, the profile of UMNO deputy president Mohamad Hasan has been boosted in the past days. While it is theoretically possible for the elections to be postponed by up 18 months, Mohamad Hasan has stated that they will be held in August – unless national elections are called before then.

For their part, a coterie of Anwar’s former party members currently in government has stated that the phone call was a betrayal of his party, PKR, and Pakatan Harapan. PH has since declared that Anwar is the coalition’s candidate for prime minister. However, behind the scenes, support for the opposition veteran is tepid at best, and other names are circulating, including those of former Health Minister Dzulkefly Ahmad and former Sabah Chief Minister Shafie Apdal.

Regardless of whether the telephone conversation actually transpired, it is possible that the two veteran politicians, with their shaky political currencies, may soon only have the other to talk to. 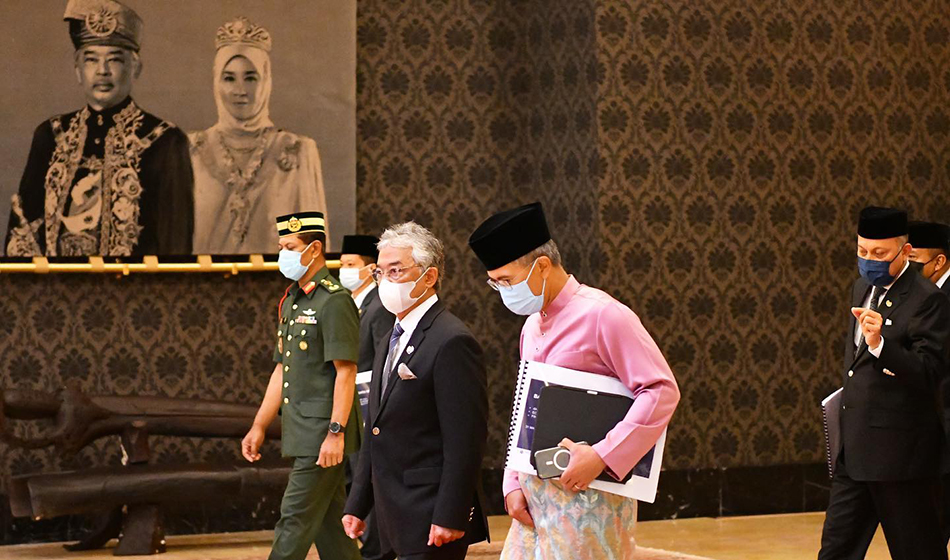 The Monarchy and Article 150